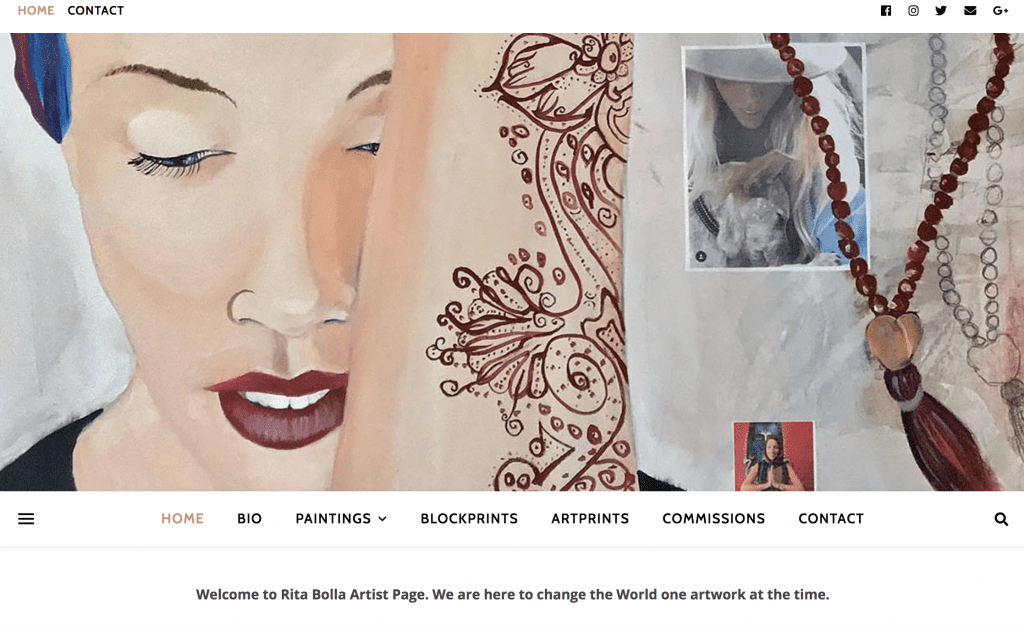 Rita Bolla is a mixed-media artist (mostly oil on canvas) who lives in Kingston, NY. I was introduced virtually by my dear high school friend Christopher, who also happens to be her husband as well as occasional collaborator. A hands-on artist, Rita had an existing WordPress website which she maintained on her own, but it reached the point where she wanted a refresh and some help with making that happen.

We talked about a minimalist solution which would reflect her aesthetic while allowing her art to shine, and chose a template which she’d feel comfortable supporting on her own post-launch. One of my favorite features is the search menu which slides in on the left (desktop version) and features her Gallery by collection as well as a 4-column Instagram feed integration.

When launched, to save time Rita requested we continue using a gallery plug-in she chose while building her previous site. Unfortunately about 3 months later her new site unexpectedly crashed. After a quick assessment, I figured out it was due to the gallery. Unfortunately the developers of that plug-in had not updated their product alongside WordPress updates, and in that time the plug-in became dysfunctional enough to take out Rita’s entire site. So I backed files up via her site host, researched new gallery options, removed the plug-in, and began rebuilding Rita’s entire gallery using a new, reputable gallery plug-in.

Rita still continues to make her own site updates and changes, while making art (both self-inspired and commissioned), creating and attending gallery shows of her work, promoting the publication of her first book (learn more about The Story of How I Found You), teaching art as therapy at local community centers and tending to her beautiful son…while anxiously awaiting her second child!

It has been a pleasure to help Rita develop her site while honoring her desire to remain hands-on in its growth.

Amanda’s work is amazing. I’m an artist myself, and while I primarily work with my hands (I paint) I do have some sort of computer knowledge and built & maintained my previous website myself. However we all have been at that point in our lives, when we just have to let experts step in, trusting that they will do the best job. Amanda did just that! I would definitely recommend her services to anyone. She’s friendly, understanding and fast. Trust her, you’ll love her work.

Return to Portfolio
Manage Cookie Consent
To provide the best experiences, we use technologies like cookies to store and/or access device information. Consenting to these technologies will allow us to process data such as browsing behavior or unique IDs on this site. Not consenting or withdrawing consent, may adversely affect certain features and functions.
Manage options Manage services Manage vendors Read more about these purposes
Preferences
{title} {title} {title}